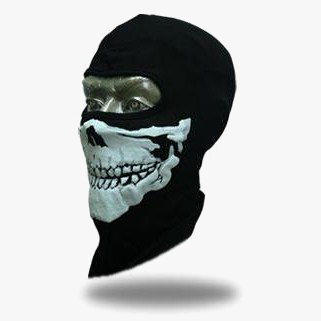 A balaclava is a usually knitted or cotton hat that is designed to cover your entire head, neck and much of your face. Balaclavas are used in extreme weather conditions, but also for a large number of sports such as car racing, motorcycling, mountain climbing and skiing or snowboarding.

There is an opening for the face on the front of a balaclava. You can usually wear a balaclava in such a way that only your eyes are visible or you can roll it up a little so that your mouth is released. Just like other hats, balaclavas are available in all shapes and colors.

Alternative use of the balaclava

Because the identity of someone with a balaclava is difficult to establish, these hats are often used by criminals for, for example, a robbery. Race car drivers also often wear a balaclava under their helmet to protect their face should their racing car catch fire.

History of the balaclava

The balaclava first came into use in the nineteenth century, when British soldiers invented the balaclava helmet. This name comes from the village of Balaclava, which produced this new type of “helmet” in the Crimean War. The balaclava was used by the British to keep the face warm and as face protection.

There are several types of balaclava on the market, such as the kind that has a hole at the mouth in addition to a notch at the eyes. Depending on your personal preference, you can go for a hat with or without extra notch at the mouth.

A mouth opening makes talking easier, but it does provide extra wind and cold on your face and in harsh weather you breathe more cold than if the hat would be close.

In woolen balaclava, you can take back the lower part of the hat on less cold days, so you can wear it as a regular hat.

Advantages of the Balaclava

Other designations of the balaclava

A balaclava is also known as a ski mask or snowboard mask, the English word before it, a bivouac mask or just a hat.

Do you want to order a balaclava? Then go to our range of Balaclava soon!

Which type of snowboard mask suits you?

On the slopes: facemasks and balaclavas

Where does the balaclava come from?